The Marshallese people and language are of Micronesian origin, which is traced back to waves of immigrants from Southeast Asia approximately 2,000-3,000 years ago. Following successive rule by Spain, Germany, and Japan, and nearly four decades of U.S. administration as a U.S. Trust Territory, the Marshall Islands became an independent nation freely associated with the U.S. under the Compact of Free Association in 1986. The U.S. conducted more than 60 nuclear tests on the atolls of Bikini and Enewetak from 1946 to 1958, including the infamous “Bravo” shot which irradiated multiple neighboring atolls, leaving a legacy of health issues and nuclear-related claims which continue to this day. The U.S. Army maintains the Kwajalein Atoll Reagan Missile Test Site, a key installation in the US missile defense network.

The Marshall Islands are composed of 29 coral atolls and 5 single coral islands, which form two roughly parallel chains running northwest to southeast: the eastern Ratak (Sunrise) chain and the western Rālik (Sunset) chain. The island nation encompasses over 750,000 sq. miles (1,942,491 sq. km) of ocean, but includes only about 70 sq. miles (181 sq. km) of land mass. More than two thirds of the population of the Marshall Islands lives in the capital of Majuro and in Ebeye, the densely populated secondary urban center.

As a nation composed entirely of low-lying atolls and coral islands, the Marshall Islands face an existential threat from sea-level rise. The average height of the land above sea level is only 7 feet (2 meters). Fringe coral reefs surround the atolls and serve as the only defense against ocean surge. Sea-level rise, in combination with wave formation and high tides, is a grave concern for the human communities, property, infrastructure, fresh water supplies, and ecosystems of the Marshall Islands. 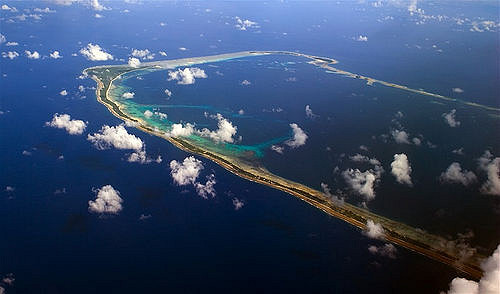 Already, some areas of the Marshall Islands flood with some regularity every few years, causing damage to homes, property, roads, and bridges, and requiring the evacuation, or temporary displacement of residents. These flooding events are the result of very high tides that coincide with storm surges.  These events will become more frequent and intense as sea-level rises. If storms become more intense as climate change progresses, they could be further exacerbated.

Drought is another key problem in the Marshall Islands. Rainfall amounts vary considerably across the atolls, and the dry northern atolls receive much less rainfall on average the southern atolls. Rainfall also varies seasonally, with much more rainfall is received between May and November than during other months. Drought is a very serious issue that affects human health and well-being as well as agriculture and other sectors. A very severe drought in 1998 associated with El Niño, for example, caused significant losses in coconuts, breadfruit, and bananas, crucial for subsistence and commerce.

Pacific tropical cyclones generally develop to the east of the Marshall Islands area, but RMI is only occasionally subjected to the full brunt of a Pacific cyclone. The northern atolls are more subject to tropical cyclones than  the southern atolls. Cyclones are more likely to develop in the Micronesian region during El Niño years.

Ocean acidification and coral reef bleaching are issues for RMI, as is the case for many Pacific Islands. The coral reefs that provide habitat for important species and  protect shoreline communities from extreme events are threatened by changing ocean chemistry and warming waters. 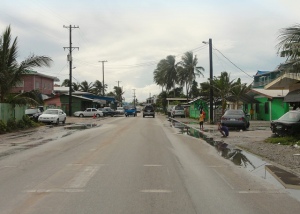 The Republic of the Marshall Islands has no choice but to begin to adapt to sea-level rise and other climate change impacts that are already affecting the country. Key strategies that the country is pursuing are to enhance and build on the existing disaster preparedness and recovery framework and to secure financial resources for adaptation.

The RMI National Climate Change Policy Framework sets out the Government’s commitments to addressing climate change and identifies a series of urgent priorities for adaptation, which include water and food security issues, sea-level rise and associated impacts on infrastructure, and health issues from rising temperatures and prolonged drought. The Joint National Action Plan for Climate Change Adaptation and Disaster Risk Management (JNAP) further guides the achievement of sustainable development goals and adaptation. Facilitative, stakeholder-driven methods are a hallmark of the implementation to date of these guiding frameworks.

The Marshall Islands Ministry of Health partnered with the World health Organization to assess climate stressors on health. In 2011, the RMI government drafted the National Climate Change and Health Action Plan to coordinate preparedness activities in the public health sector across government ministries.

The Marshall Islands has played an active role in international climate negotiations under the United Nations Framework Convention on Climate Change (UNFCCC). Most recently, at the twenty first Conference of Parties to the UNFCCC, Republic of the Marshall Islands Minister of Foreign Affairs Tony DeBrum spearheaded a “high ambition” coalition of more than 100 countries, including the U.S., that advocated for limiting global warming to 1.5 degrees Celsius.

Pacific RISA, Republic of the Marshall Islands, available at http://www.pacificrisa.org/places/republic-of-the-marshall-islands/