The Federated States of Micronesia (FSM) comprises four island states— Yap, Chuuk, Pohnpei, and Kosrae in the North Pacific Ocean, totaling 607 islands (65 inhabited) extending 1,700 miles across the Caroline Islands archipelago. The islands of FSM are diverse in their geologic features, and include both mountainous, volcanic islands and low-lying coral atolls. All states are centered around one high volcanic island and have numerous outer atolls and islands, except Kosrae State, which is essentially one high volcanic island. Pohnpei Island is the largest island in FSM, and it contains the capital of Palikir.

Each of the four States exhibits its own distinct culture and tradition, and there are eight major indigenous Malayo-Polynesian languages spoken across the islands. However there are also common cultural and economic bonds among the communities of the FSM that are centuries old. Cultural similarities are evidenced in the importance of the traditional extended family and clan systems. Most property is held as family trusts and land use rights are passed down from generation to generation within the extended family system. These traditional systems govern behavior and are reflected in political structures. Many of these islands still have matrilineal land tenure systems and recognize traditional leaders in addition to the government system.

Ruled by Spain starting in the 16th century, then Germany, and passed into Japanese control in 1919, the FSM was a setting for military occupation throughout much of its recent history. Following World War II, it became part of the United Nations Trust Territory of the Pacific Islands. In 1979, the states of the Yap, Chuuk, Pohnpei and Kosrae signed a new constitution and became the Federated States of Micronesia. As an independent nation, the FSM joined the Compact of Free Association with the United States in 1986, and renegotiated this agreement in 2003 to extend it for another 20 years.

With the variation in geology and climate among the islands of FSM, the country experiences a wide range of climate impacts across different locations. 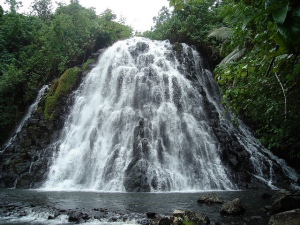 The El Niño Southern Oscillation (ENSO) has a strong effect on precipitation in Micronesia, with strong El Niño events corresponding closely with an increased risk for drought in the following year. Despite typically plentiful rainfall (Pohnpei is one of the wettest places on Earth), the islands of FSM have limited water storage capacity and small groundwater supplies. The states have experienced several severe droughts in recent times; in 1982-83, 1992-93, 1997-98, 2007-08 and 2015-16. Severe drought led to a disaster declaration in 1998 and emergency declarations in 2007 and 2016. The states of Pohnpei and Chuuk declared drought emergencies in 2007 on several islands due to food and water shortages.

In addition, the FSM faces flooding from waves and extreme tides, sea level variation, and coastal erosion. In 2008, for example, a nationwide state of emergency was announced after  FSM communities were flooded by waves and high tides, which destroyed food crops and created a food and drinking water shortage.

Tropical typhoons (June to December) constitute an annual threat, particularly to the low-lying atolls [1, 3]. With the current stresses on the environment, infrastructure, and economy in the FSM, more frequent extreme events and climate change could pose severe problems for the resilience of the island communities.

Fishing is a primary economic sector in the FSM, and reduced fish catch highly correlates with increases in sea surface temperature (SST) and ENSO events.  As pelagic fish leave the region with rising SSTs, the FSM could experience economic setbacks.

To address climate-related issues, several non-profit organizations working with the government have begun to identify marine protected areas and conservation areas to protect resources for food security. In addition, some of the low-lying atolls have made arrangements to secure tracts of land on higher islands for possible relocation.

Climate scenarios have also played a role in ongoing planning for project design in Micronesia, where a coastal highway was redesigned with consideration of the risks posed by sea-level rise and heavier rainfall.