The University of Hawai‘i Coastal Geology Group has developed a map of coastal flooding and erosion on the island of O‘ahu under a low-end projection of sea-level rise for 2100 if greenhouse gas emissions continue at the current levels. The map can be viewed as a video “fly over” of the island of O‘ahu. The video is available on the UH Coastal Geology Group’s website. Pausing the video allows for examining the potential impacts and “hot spots” of coastal flooding in specific locations around the island.

Also incorporated into the map is a visualization of groundwater table flooding under the sea-level rise projection for 2100. Sea-level rise also raises the groundwater table, in addition to causing direct flooding, leading to increased flooding and damage, particularly when high rainfall and high ocean levels converge. 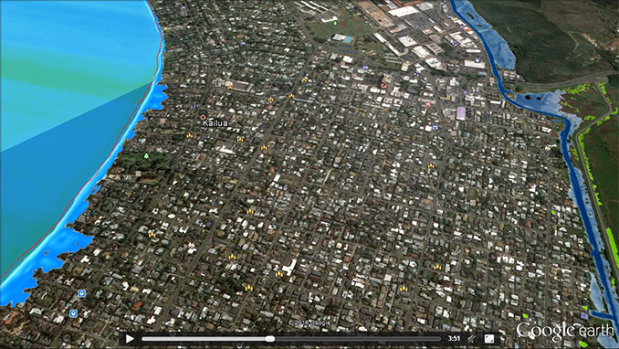 UH Coastal Geology Group explains on their website that an appropriate planning target for decision makers in Hawaii is 1 foot of sea-level rise by mid-century (2050) and about 3 feet the end of the century. To create the new map, 3 feet of sea-level rise was used.

The University of Hawai‘i Coastal Geology Group is an affiliation of researchers, technicians, and graduate students within the Department of Geology and Geophysics in the School of Oean and Earth Science and Technology (SOEST) that conduct investigations of shoreline change, carbonate geology, reef geology, sedimentology and coastal morphodynamics. Dr. Chip Fletcher, Associate Dean for Academic Affairs of SOEST, leads the Coastal Geology Group, and is a Professor of Geology and Geophysics.