Tropical coral reefs are among the most productive and diverse ecosystems in the world: thousands of species coexist in a complex structure built by living corals. Coral ecosystems are of particular ecological, economic, and cultural importance in the Pacific Islands region, and this region supports the majority of coral reefs within the United States’ jurisdiction. 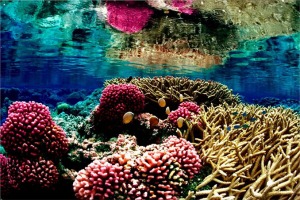 These ecosystems are declining due to a plethora of human impacts, including overutilization, land-based pollutants, introduced invasive aquatic species, and climate change. Two climate-related phenomena in conjunction pose a potentially catastrophic threat to the long-term survival of coral reef ecosystems in the Pacific Islands region: rising sea-surface temperatures and changes in ocean chemistry.

These ecosystems are declining due to a plethora of human impacts, including overutilization, land-based pollutants, introduced invasive aquatic species, and climate change. Two climate-related phenomena in conjunction pose a potentially catastrophic threat to the long-term survival of coral reef ecosystems in the Pacific Islands region: rising sea-surface temperatures and changes in ocean chemistry.

Over the past 30 years, periods of elevated sea-surface temperature have become more commonplace, often correlating with coral bleaching (Donner, 2011). Coral bleaching occurs when water temperatures rise 1.8° to 3.6°F above the warmest normal summer temperatures and persist over three to four weeks or more. This stress can cause the corals to expel their crucial, colorful symbiotic algae and thus turn white (hence the name “bleaching”). Intense coral bleaching is often followed by coral death due to starvation, since the by-product of algal photosynthesis is a primary food source of the coral.

Coral bleaching is becoming more frequent as the oceans warm. It is often associated with strong El Niño events (Hoegh-Guldberg, 1999). Coral bleaching in 1998 and 2010 caused large-scale coral deaths in reef systems around the globe, with the 1998 event heavily impacting Palau, in the Western North Pacific sub-region, and Palmyra Atoll in the Central North Pacific sub-region (Turgeon et al., 2002). In Palau, nearly one-half (48%) of 946 surveyed colonies were totally bleached, and a further 15% were partially bleached (Bruno, 2001). Coral bleaching has also been observed elsewhere in the Micronesian, Marianas, Samoan, and Hawaiian archipelagos. The Reefs at Risk Revisited (2011) report predicts that by 2050 many of the reefs in the Pacific will bleach every year. This frequency of bleaching is worrying because it allows little time for corals to recover.

Adding to the stress of high temperatures is the increasing acidification of the ocean, caused by rising levels of carbon dioxide in the air that is absorbed by seawater. One of the impacts of ocean acidification is that less carbonate is available in the form necessary for coral reefs to build their calcium carbonate skeletons. The skeletons that these small coral polyps build are a fundamental building block of coral reef ecosystems. Based on the rate of coral loss reported over the past 20 years and the projected effects of more frequent coral bleaching and ocean acidification, average coral cover throughout the Pacific is expected to decline to 15% by 2035 (Pratchett et al., 2011).

Coral reef managers have few options for preventing or reducing coral bleaching because it is not possible to cool large masses of seawater. They can focus on increasing the potential resilience of reefs by reducing human impacts such as overfishing, sediment and pollutant runoff, and invasive species. In addition, early-warning systems that predict coral bleaching and monitor the effects on reef ecosystems have made it possible to identify which reefs are perhaps more resistant to bleaching and have a better chance of recovery.

In an effort to expand the range of management options, researchers in American Sāmoa are testing technologies that could cool selected, important reefs and buffer them from acidification. Seasonally high temperatures at a particular reef on the island of Tutuila cause predictable coral bleaching, creating an ideal test site. Initial tests have shown that reducing peak water temperatures by 1.8° to 3.6°F enables two sensitive species of coral to regain and retain their healthy color during periods of thermal stress. In conjunction with strategies for reducing land-based stress, these and other management tools may provide Pacific Island communities with new, localized conservation measures to help combat the effects of global climate change on their valuable coral reef resources.