Water supplies on small, low-lying atoll islands are extremely vulnerable to droughts and to saltwater inundation caused by high tides. Water for drinking and other uses comes from two sources: rainwater catchments and shallow wells that draw from a layer or “lens” of freshwater that is underlain by brackish or saltwater. Groundwater in the part of the lens that is near the ground surface in the central depression of the island is also important for taro cultivation. On some atoll islands, the freshwater lens is thin and highly vulnerable to contamination from the saltwater below, especially if too much freshwater is drawn from the lens.

The El Niño event of 1997/98 caused severe droughts and water shortages on many Pacific Islands. Between January and April 1998, Majuro Atoll in the Marshall Islands received only 8 percent of the normal rainfall for the period (Presley, 2005). By April 1998, the Majuro Water and Sewer Company (MWSC), which relies primarily on rainwater catchment and to a less extent on groundwater, was only able to provide water to the island’s 27,000 residents and businesses for about 10 hours every two weeks. Health officials reported more than 1,000 cases of dehydration, drought-related skin disease, and respiratory infections (Pacific Islands Report, 1998).

Because of human health concerns, large reverse-osmosis water-purification systems, capable of producing 125,000 gallons of freshwater a day from treated seawater, were brought to Majuro to help alleviate the water shortage. Concurrently, groundwater withdrawals from the freshwater lens in the Laura area of the atoll were increased from 100,000 gallons to a maximum of 286,000 gallons a day (Presley, 2005). During the drought, public concern arose about these increased groundwater withdrawals because of the potential impact of saltwater intrusion on taro, breadfruit, and banana crops. The US Geological Survey, in cooperation with the Republic of the Marshall Islands government and the Federal Emergency Management Agency, installed monitoring wells to determine the condition of the freshwater lens during the drought. Results indicated that saltwater intrusion had not affected crops despite the increase in groundwater withdrawals. The study demonstrated the importance of maintaining a groundwater monitoring program to (1) evaluate the status of the freshwater lens, (2) indicate a sustainable pumping rate that will protect the resource from saltwater intrusion, and (3) help local organizations such as the MWSC address public concerns (Presley, 2005).

Integrated management of rainwater and groundwater resources is critical for water security, especially on the less-developed atoll islands in the Republic of the Marshall Islands and Federated States of Micronesia (Hamlin & Takasaki, 1996). One way to help alleviate chronic water-supply shortages during droughts would be to develop groundwater resources for non-potable uses where feasible so that rainwater can be saved for drinking and cooking. Although groundwater from shallow wells can be used to mitigate water shortages during droughts, rainwater catchment systems are the only source of freshwater when storm waves and uncommonly extreme high tides known as “king tides” inundate low-lying atoll islands, turning all the groundwater brackish. In December 2007 and again in 2008, several atoll islands in the Federated States of Micronesia were flooded by a series of highsea/surf events. These saltwater floods had a significant impact on taro crops that are commonly cultivated in a depression near the center of the island. In December 2007, on the outer islands of Chuuk State, where 13,000 people or one-fourth of the state population resides, an estimated 90 percent of all taro crops were destroyed by saltwater inundation (Hezel, 2009). 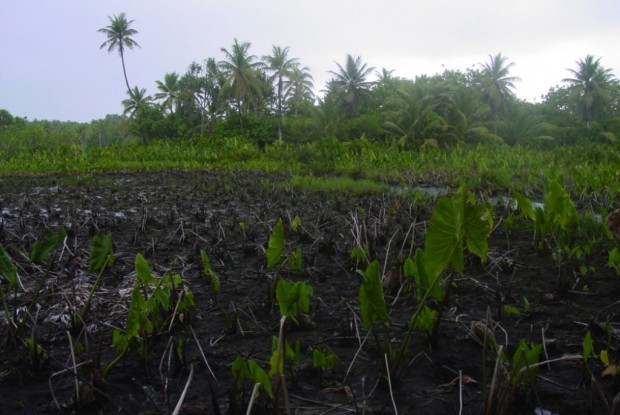 Taro crops destroyed by saltwater inundation at Lukunoch Atoll, Chuuk State, Federated States of Micronesia. Giant swamp taro (Cyrtosperma) is a staple crop in Micronesia that requires a two- to three-year growing period from initial planting to harvest. It may take two years of normal rainfall to flush brackish water out of a taro patch, so there will be a five-year gap before the next harvest, assuming no more saltwater inundation takes place (Hezel, 2009). Photo courtesy of John Quidachay/USDA Forest Service.

This case study demonstrates the vulnerability freshwater resources on atoll islands. Data from monitoring is needed to manage rainwater and groundwater resources conjunctively and increase the adaptive capacity of low islands to meet the challenges posed by climate variability and change. With no monitoring plan in place or funding to upgrade the groundwater pumps in Laura, the existing on-island adaptive capacity to respond to the drought was low, despite warnings received in advance.