Episodic extreme water level events pose a serious risk to Pacific Island regions. Higher-than-normal sea levels, for example, allow more wave energy to pass over reef systems. Combined with high waves, this increases the possibility of inundation of low-lying coastal areas and low islands (e.g., atolls) and contributes to coastal erosion. This, in turn, can lead to saltwater intrusion, which damages freshwater sources and agricultural crops; damage to roads, houses, and other infrastructure; and destruction of critical habitat such as nesting sites for seabirds and turtles. Understanding and identifying the processes that cause such extreme events is essential to understanding impacts and informing disaster risk reduction as well as climate adaptation planning in a world where sea level is rising in response to a changing climate.

In December 2008, the Solomon Islands, Republic of the Marshall Islands (RMI), Federated States of Micronesia (FSM), and other low-lying islands in the Western North Pacific sub-region (Figure 3-12) experienced damage from ocean flooding due to a convergence of climate and weather factors:

Figure 3-12  Locations of coastal inundation as measured by NOAA tide gauges: the Marshall Islands (orange) in December 2008, and Midway Atoll (white) in winter 2011. (Courtesy of US Fish and Wildlife Service, except for Kosrae image, which is courtesy of Kosrae Island Resource Management Agency staff.) 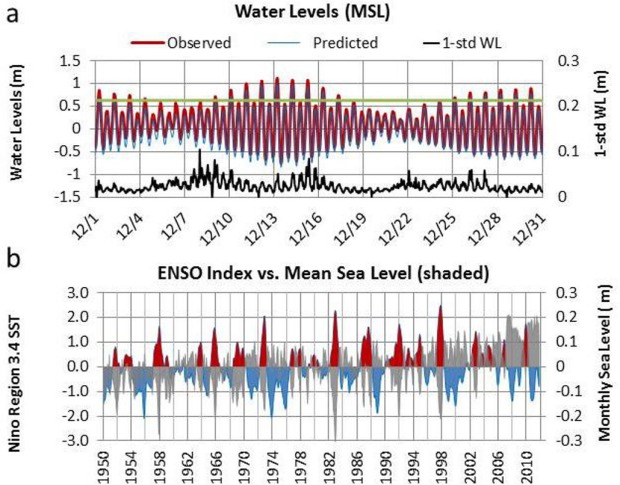 The result was widespread damage on numerous low-lying islands. Immediate impacts included eroded beaches, damaged roads, and flooding of houses. A state of emergency was declared on Majuro, capital of the Republic of the Marshall Islands, with damage topping $1.5 million (Wannier, 2011). In the Federated States of Micronesia, seawater contaminated aquifers, wells, wetlands, and farms, damaging or destroying nearly half of the nation’s cropland (Fletcher & Richmond, 2010). Here, as well, a state of emergency was declared, sparked primarily by concerns about immediate and longterm food shortages. The coastlines on several islands were littered with debris, raising fears of a health crisis, particularly when local cemeteries were flooded.

In the winter months of 2011, a combination of high sea levels and large waves struck Midway Atoll on two different occasions. Midway and the other Northwestern Hawaiian Islands (NWHI; Figure 3-14) provide nesting sites for 95% to 99% (Arata et al., 2009) of the 1.3 million Laysan albatross (Phoebastria immutabilis) in the world and 95% of the world population of 132,000 black-footed albatross (Phoebastria nigripes). In January 2011, a powerful storm hit Midway Island, killing thousands of unhatched eggs and newly hatched chicks. The storm caused a drop in pressure that raised the sea level by more than 0.98 feet (0.3 m). At the same time, strong winds and waves battered the island. An even more severe storm hit Laysan Island in February, with large waves and winds of more than 74 miles per hour. This storm destroyed more than 40,000 Laysan albatross nests and 9,000 black-footed albatross nests (Flint et al., 2011). These birds tend to return to the same nest sites every breeding season, even after their nests are destroyed. However, as sea level rises, flooding events will become more frequent in albatross nesting zones, and breeding populations within the NWHI will drastically decline. 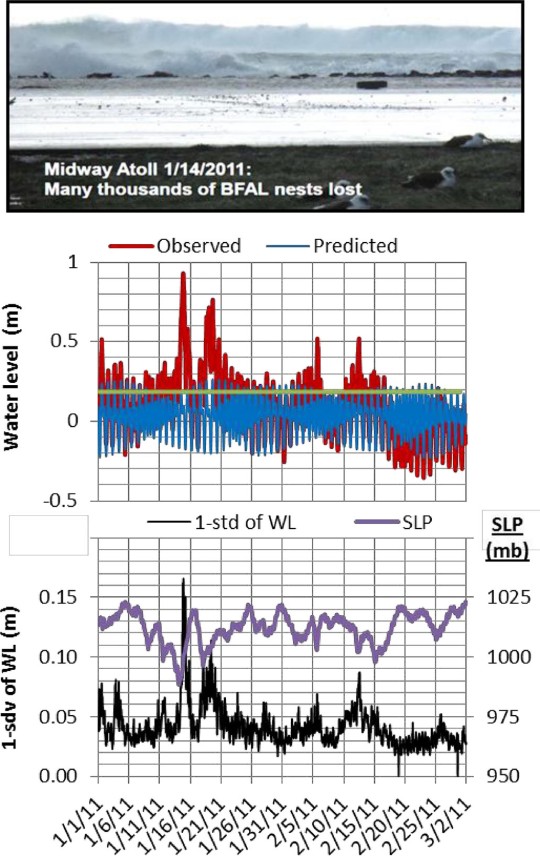 So-called mesoscale eddies are another phenomenon that has been observed to contribute to increased flooding and erosion (Firing & Merrifield, 2004). Unique to the Hawaiian Islands for the most part, these features are capable of producing a prolonged impact when they occur along with high tides and moderate-sized waves. In September 2003, a westward propagating circulating eddy was associated with the highest daily (average of hourly measurements) water level and highest monthly value ever recorded
in Honolulu (Figure 3-15a, shown since 1932). Due to its large size, slow passage, and circulation characteristics (clockwise from a high sea surface in its center), the eddy raised sea levels by about 6 inches (15 cm) for nearly two months starting in late July 2003 (Figure 3-15b) (Firing & Merrifield, 2004).

During this period, there were numerous daily extremes (Figure 3-16, left), defined as daily maximum heights (based on hourly values) exceeding the 99th percentile relative to the long-term trend over 1980–2010 (black line in Figure 3-15a). Sea level peaked the last week of September (highest daily mean on September 28), when the seasonal cycle of sea level is also highest (typically more than 8 cm [3.15 inches] higher than its low in April/May) due to normal seasonal surface heating and related thermal expansion of the upper ocean. Also contributing to this absolute maxima, but in a more subtle manner, was the slow rise in relative sea level over the past century (about 0.059 inches/year or 1.5 mm/yr). 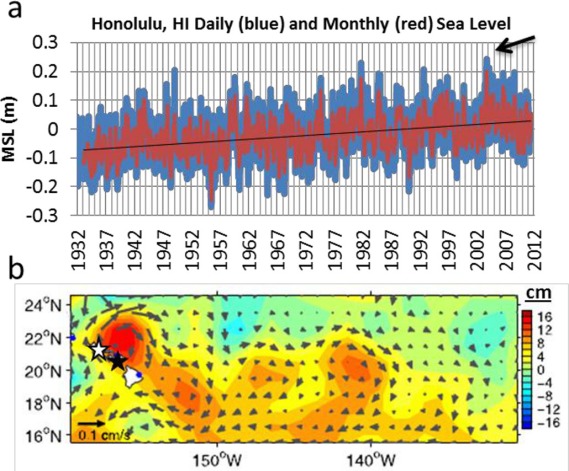 This eddy was not necessarily a rare or unique event; in fact, there have been numerous eddies, which can be tracked by satellite altimeter (Figure 3-16, right). Eddies have been observed to originate far to the east of the Hawaiian Islands as well as in the lee (west) of the islands themselves. They are thought to form in response to changes in regional wind forcing related to El Niño-Southern Oscillation (ENSO) and from instabilities within the prevailing westward-flowing North Equatorial Current (Mitchum, 1995; Firing & Merrifield, 2004; Chen & Qiu, 2010). Although eddies occur on an inter-annual basis, they generally produce extreme events only when they combine with seasonal high tides and waves. Although storms have always caused flooding on low-lying islands of the Pacific, the concern today is that sea-level rise related to longer-term climate conditions will combine with storms to cause even more frequent and more damaging floods in the years ahead. 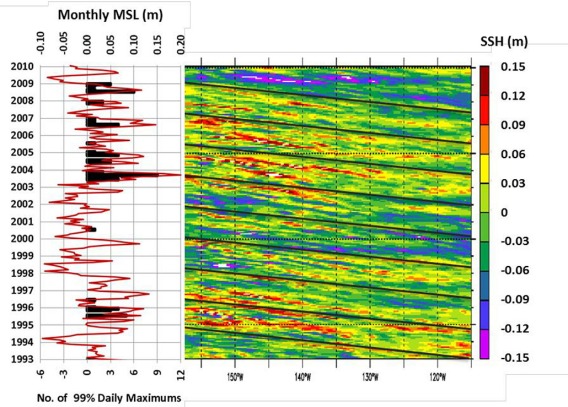